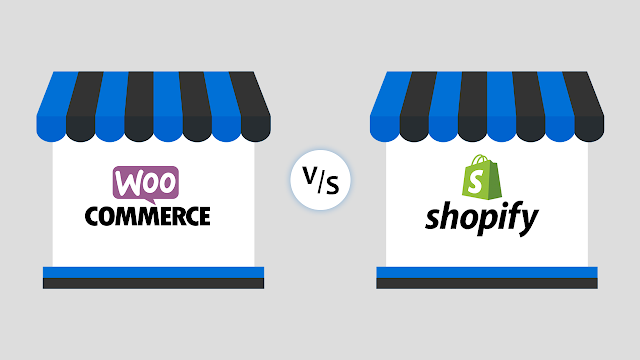 You might want to open an online store. Not sure if you should use WooCommerce or Shopify?

The best ecommerce platforms in the world are Shopify and WooCommerce. Each has its own pros and cons.

As a business owner, you need to make sure you choose the right ecommerce platform for your business.

In this guide, we’ll show you in detail how Shopify vs WooCommerce are different. The goal is to list their pros and cons so that you can decide which one is best for your ecommerce store.

Shopify vs WooCommerce: An Overview

Shopify is an all-in-one ecommerce platform that makes it easy to set up an online store, accept payments, and keep track of your inventory.

With Shopify, you don’t have to worry about the technical parts of running an ecommerce site, like web hosting, security, caching, etc.

WooCommerce is an ecommerce plugin for WordPress that is free and can be used by anyone. It lets you run an online store using the most powerful content management system (CMS).

Because WooCommerce is open source, you can change everything about your store and easily add your own extensions.

Each of these plans comes with web hosting and an SSL certificate. It will have a subdomain with the Shopify brand (like https://your-store.myshopify.com).

WooCommerce is a plug-in for WordPress.org that lets you sell online (also known as self-hosted WordPress). It is free to use and has an open source code.

To start a WooCommerce store, you will need a domain name, an SSL Certificate, and a WordPress hosting account.

Methods of Payment: Shopify vs WooCommerce

Shopify gives customers a lot of ways to pay when they are checking out. It has its own payment system called Shopify Payments, which is powered by Stripe. It also works with all of the most popular payment gateways from other companies.

By default, WooCommerce lets you accept payments through PayPal and Stripe. They also have a Stripe-powered WooCommerce Payments system.

It also works with every other popular payment service. You can add payment integrations for Authorize.net, Amazon Pay, Square, Alipay, and many more.

Shopify vs WooCommerce in Terms of Ease of Use

Shopify is a fully hosted platform, which means you don’t have to install, manage, or update any software. You also don’t have to worry about security, performance, backups, or compatibility.

When you sign up for Shopify, you can choose a design from many free themes. After that, they help you customize your site and add products.

WooCommerce is not like Shopify, which is a hosted platform. This means you will need to install the WooCommerce plugin, handle updates, keep backups, and make sure your website is safe. Most of these tasks can be done automatically for you by free and paid plugins.

Which is the best ecommerce platform, WooCommerce vs Shopify?

·         Both of them allows sellers to have a custom website design for their shop.

·         Both Shopify and WooCommerce are strong ways to start an online store. It really depends on your skills and what you like.

·         It’s much easier to use Shopify. You don’t have to install anything, and you can start using it right away. Setting up payments is easier, and their pricing plans are easy to understand.

·         You don’t have full control over everything with Shopify, which is a drawback. Transaction fees, add-ons, and integrations can drive up your costs.

·         WooCommerce is free and gives you full control over your website because it is open source. WooCommerce makes it much cheaper to open an online store, especially with these WooCommerce hosting companies.

·         The downside is that you’ll have to keep the software up to date. It takes a little time to get used to.

·         WooCommerce is the best platform for you if you want to run your online store without spending a lot of money and have full control over it.

·         Shopify is the better platform for you if you want something that doesn’t require any work and can grow to any size.

Tips For Home Buyers Entering The Market In 2023

How to Keep Air Conditioners Healthy In Summer

Happy At Home: Improve Your Mood With Painting Contractors Miami

Things a Savings Account Can Help You Save Money For