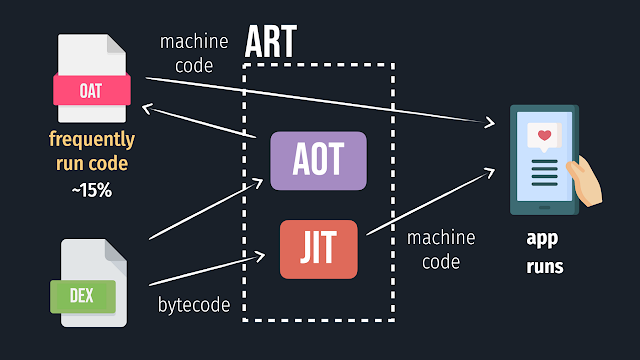 Android Runtime (ART) is an application runtime environment used by the Android operating system. ART replaces Dalvik, the process virtual machine originally used by Android, which was itself a descendant of the Java Virtual Machine (JVM).

What is Android Runtime (ART)?

The Different Between ART and Dalvik

Android Runtime (ART) is a managed runtime used by applications and system services on Android. ART and its predecessor Dalvik were originally created by Google, and later open-sourced as part of the Android Open Source Project (AOSP).

Overall, ART is a more efficient runtime than Dalvik, but because it compiles apps ahead-of-time instead of just-in-time, it has longer installation times.

Android Runtime (ART) is the managed runtime used by applications and services on Android devices. ART is an improvement on the Dalvik runtime that was used in older versions of Android. ART introduces ahead-of-time (AOT) compilation, which compiles entire applications ahead of time to native machine code, resulting in faster startup and improved performance.

Pros and Cons of ART

There are many benefits to using the Android Runtime (ART), including improved performance, better battery life, and a more robust Java environment. However, there are also some drawbacks to using ART, including the potential for incompatibility with older apps and devices.

How to Switch to ART

One of the big changes in Android 4.4 KitKat was a new runtime environment called ART. This replaces the old Dalvik runtime used by previous versions of Android. ART is faster and more efficient, and it’s designed to improve battery life and overall performance of your device. If you’re using a compatible device, you can switch to ART right now. Here’s how:

Go to Settings, then About Phone.
Tap on the Build Number field seven times. You’ll see a message that says “You are now a developer!”
Go back to the main Settings menu, and you’ll see a new option called Developer Options. Tap on that.
Scroll down to the Debugging section, and tap on Select Runtime.
You’ll be given a choice between Dalvik and ART. Select ART, then reboot your device.

That’s all there is to it! Once your device reboots, it will be using the new ART runtime. You may notice some differences in performance; ART is designed to be faster and more efficient than Dalvik, so things like app launch times should be quicker. Keep in mind that not all apps are compatible with ART yet, so you may encounter some stability issues. But

Android Runtime (ART) is an application runtime environment used by the Android operating system. ART replaces the former Dalvik Virtual Machine with a more efficient and faster VM that makes better use of available resources on a device. ART is still in development and not yet available on all devices, but it has already shown significant performance improvements over Dalvik.