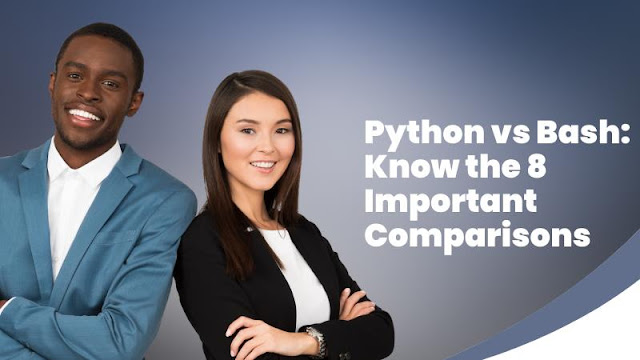 Python and Bash are two of the most common programming languages automated developers use. However, selecting one of them can be difficult at times. So you may be looking for a blog that tells you which language to use. However, the honest answer depends on the task, scope, and complexity. Let us examine the difference between Python vs Bash.

Python and Bash scripting are two methods for programming and automating tasks on a Linux system. Many Linux users choose to learn either one or both, and some learn both.

In order to learn about Python Assignment Help language, you need to scroll through this blog.

Python is a programming language used to create websites and software, automate tasks, and analyze data.

In addition, it is a general-purpose programming language. This means using this language to create a wide range of programmes and not specializing in any particular problem.

Python is widely used in the development of websites and software, as well as task automation, data analysis, and visualization. However, many non-programmers have adopted Python because it is relatively simple to learn.

There are many features of Python programming; some of them are as follows:

➢    Firstly, Python is a very simple language to learn when compared to other languages such as C, C#, Javascript, Java, and so on.

➢    Secondly, the Python programming language is freely available on the official website.

➢    Object-Oriented programming is a key feature of Python.

➢    Python is a high-level programming language. We don’t need to remember the system architecture when writing Python programmes.

➢    Lastly, it is also an integrated language because it can be easily integrated with other languages such as C, C++, and others.

Brian Fox created Bash as an improved version of the Bourne Shell program ‘sh’. In addition, it is a GNU open-source project. However, it was released in 1989 as one of the most popular GNU/Linux shell distributions.

Moreover, Bash outperforms Bourne Shell in functionality for both programming and interactive use. It includes command-line editing, key bindings, a complete command history, and other features.

Here are the features of Bash scripting.

➢    Bash has one-dimensional arrays that can easily reference and manipulate data lists.

➢    Bash contains Control Structures such as the select construct, which is specifically used for menu generation.

Important Comparisons between Python vs Bash

Below, we will compare Python programming and Bash scripting in a few key areas.

Whereas Bash is a command processor, not a computer programming language. Furthermore, the Bash shell appears to be a software replacement for the Bourne shell.

Python is an easy, simple, and powerful programming language.

On the other hand, Bash is difficult to write and lacks the power of Python.

It is an important parameter in the comparison between Python vs Bash.

Whereas Bash does not support OOP and understands the only text.

Python appears to be more effective and well-known for its accessibility and dependability. It’s less difficult to keep up with than Bash.

On the other hand, Frameworks are not addressed in IT. Bash is more difficult to maintain than Python.

You need to know the third-party program factor when comparing Python vs Bash.

On the other hand, Bash does not need any libraries as dependencies.

Python is the default administrator shell in Windows.

Whereas Bash is the default admin shell on every Linux system you’ve heard of, as well as macOS, making it perform better than Python.

When the script is larger than 100 lOC, Python is preferable.

However, Bash is suitable for smaller scripts.

In this blog, you learned about the main differences between Python vs Bash. After you understand the differences and strengths of each, you can decide which is more worthwhile to learn and which is better suited to tasks that you encounter.

Python is an object-oriented programming (OOP) language, making it more versatile than Bash. In addition, it is useful for almost any task. Besides, it is compatible with the majority of major operating systems. The installation of this language by default on most Unix/Linux systems.

On the other hand, Bash is a UNIX shell and command language interpreter that could serve as a software replacement for the original Bourne shell (sh). The Bash shell is responsible for command-line tools that allow users to edit and manipulate their command history.